The Compound Interest of Fitness The Compound Interest of Fitness

This year, as I wrapped up tax season last month, I was – of course – happy to be finished with the arduous task of cataloguing receipts and filling out every minuscule form for the IRS. However, I was also struck by how much I wanted to be more proactive this year, to plan ahead so that next April would be easier and faster.

As I pondered ways to be more organized and strategic in my bookkeeping, I realized that there are some pretty convenient overlaps between finances and fitness, even down to compound interest, long-term investments, and getting in the right headspace.

Of course, there are the stereotypical “spenders” and “savers,” but financial health, like physical health, often runs deeper than the obvious cliches and “types.” To delve into the complexity of these issues, I have created composite characters to illustrate how different fitness and eating decisions can impact your long-term health in five different ways, and I’m going to be taking each concept a week at a time.

Here is the first question to ask yourself about how your financial behavior may be mirrored in your fitness and health habits:

Do you contribute regularly to your “fitness investment” over time?

Exercising regularly lets you enjoy the benefits of the health equivalent of compound interest. In the financial world, this type of interest is a yield from an investment like an IRA that includes both the principal (the deposit) as well as interest on the interest. This means that contributing for 10 years starting at 25 is better than contributing for 30 years starting at 35 (to bust any perfectionism, keep in mind that starting at 35 is still great, and better than 45… and 45 is better than 55!). Continuously contributing to an account that yields compound interest is a no-brainer, because the results are powerful in the long run.

Exercising regularly over the course of a lifetime will yield similar results. Longevity of participation is more important than the amount of participation, using this metric.

Evan was never technically overweight as a teenager, but he wasn’t athletic, either. Then, throughout his 20’s and 30’s, he gradually put on 60 pounds and developed a “desk job” sedentary lifestyle, getting takeout every day that work was busy (which was most days). When he turned 40, he went for a “milestone” visit to the doctor and got some troubling news – his cholesterol was higher than optimal, his blood pressure and blood sugar didn’t look great either, and his knees were stressed from the additional weight. Motivated, Evan immediately made many traditional weight loss efforts at a fairly intense level: he immediately began running several miles a day, started lifting weights at the gym, and hit the dieting hard. As a result, he enjoyed weight loss, but found that he had difficulty maintaining it. His workout regime was demanding, and it seemed that as soon as he allowed some element of his “former life” back into his routine, like a few days of skipped workouts or a couple of beers, he would put on a few pounds.

Ashley participated in sports in high school. She continued to play in a soccer league throughout college and into young adulthood, and when she switched cities for work, she continued to run on her own a few times a week. Additionally, Ashley was mindful about her diet and tried to eat as healthfully as possible on a regular basis throughout her 20’s and 30’s. She planned her meals and cooked for herself, and experimented with new recipes and ingredients. She packed snacks for work as soon as she started her first professional job in her 20’s, and never stopped that habit. She also did a great deal of informal “micro-exercise” throughout her week. Even though she worked a desk job, she made sure to take the stairs at work, biked for fun on the weekends, and took her dog for frequent walks when she was at home. When Ashley turned 40, there was no unusual news at the doctor. Ashley was simply… 40. She was still at healthy weight without focusing on it excessively, and even though her most intense participation in exercise was long past, she had no difficulty maintaining a relatively lean muscle mass and had a clean bill of health.

What’s the lesson from Evan, who did the equivalent of an aggressive late-in-life IRA, and Ashley, who metaphorically started her investment in her teens and made her biggest deposits early in life?

No matter your age, procrastinating will only make results harder to achieve. Staying fit for a longer period of time as early in life as possible will yield metabolic benefits for your body, whether you are reading this at 18 or 58. It’s just like compound interest – your body will yield “interest on interest” if you maintain a healthy weight, high activity level, and nourishing diet throughout your lifespan.

The flip side of this, however, is that it is never too late. Even if you feel that you identify more with Evan than with Ashley, the rule of compound interest still applies in your favor… if you start now. If you feel that way, like maybe you’re a little behind, play a game with the above example and change the ages to match your life story better. Maybe Ashley makes a change at 35 and reaps the benefits at her 65-year checkup.

No matter what, it’s best to start as soon as possible, preferably now.

Just as with financial goals, fitness goals are equally focused on your behavior in the present and the desired outcome in the distant future. You have to be maddeningly focused and yet able to deal with the delayed gratification of the results.

Now is important, so that 20 years from now is great.

Whenever I meet a new client, the first assignment is always a food log. They have to track everything they eat for one week, and e-mail it to me at the end of the week. However, I never say, “start tracking Monday.” I say, “Start today by writing down everything starting with what you already ate this morning,” whether it’s a Monday, Thursday, or Saturday.

This helps clients avoid the “Monday diet” mentality, and instead cultivates a “start now” mentality. It’s a microcosm of how you have to adjust your mindset about a lifetime of fitness.

If you were planning on starting that great new workout or way of eating on Monday, don’t delay – start now! 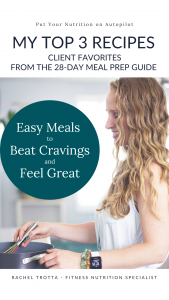