“I just have trouble figuring out what to make.”

This is a common refrain that pops up during conversations about meal prep. My clients want to eat better, but don’t know where to start.

To boil down the numbers, the vast majority of people want to cook more, but feel too overwhelmed to actually do it. The result is that consistent home-cooked meals tend to remain an ideal, rather than a reality.

But when many restaurant meals contain more than 1,200 calories and hyperpalatable (i.e. packaged) foods tend to increase rather than satisfy cravings, it’s clear that a great goal for many people would be to move that ideal into reality.

For myself, I can certainly see the obvious relationship between cooking and results in my own weight loss success. Cooking at home not only allows me to be more truly nourished, but also creates more flexibility around food. This is because when you cook most of your meals at home, fat loss or weight maintenance is not so contingent on a specific diet or strategy, because every meal tends to be so much lighter in calories and higher in quality.

However, a lot of my clients have difficulty making that leap – the jump from thinking about meal prepping to actually managing their own menu plans and executing them effectively.

Why is this? Why do the simple acts of grocery shopping and cooking overwhelm us so much?

First, I think that our busy lives, which keep us running slightly behind the ball all the time, play a role. Secondly, in a topic for another time, I think that the mainstream influence of fringe restrictive diets have contributed to this problem by raising our standards of what is acceptable or “healthy” to eat, narrowing our options dramatically.

But for today, I want to focus on what I think is the most important aspect of this inability to consistently cook at home: what I call “Pinterest Paralysis.”

Much like fitness information overload, too much input about what to eat, how to eat, and how to cook it have overwhelmed well-intentioned people into inaction.

It seems like sources of inspiration like Pinterest, food blogs, and food TV should propel us to cook more, not less. But it seems that the opposite phenomenon occurs – the more we see, the less we do. When we watch celebrity chefs whip up unheard-of combinations of exotic ingredients, or scroll through galleries of sumptuously-photographed food blogs, it can have the reverse effect than is intended: cooking becomes more of an expert activity, something to be experimented with every once in a while (when the kitchen is spotless and time is abundant), instead of a necessity for living that everyone can easily do on a limited budget (both temporally and financially). By being so inundated, we fall victim to the “tyranny of choice.”

As Eddie Yoon says via the Harvard Business Review, cooking is shifting from “a daily activity, to a niche activity that a few people do only some of the time.”

Yoon continues: “Beyond the numbers, it also suggests that our fondness for Food TV has inspired us to watch more Food TV, and to want to eat more, but hasn’t increased our desire to cook. In part, Food TV has raised our standards to discouragingly high levels: How many of us really feel confident in our cooking skills after watching Iron Chef?”

So how do we get over this “Pinterest Paralysis,” and make the leap from wanting to cook more, watching food TV, and scrolling through Pinterest to actually cooking more?

When I encounter this indecision in clients, I have five easy suggestions. It’s all about consolidating preparation, reducing decision-making, and keeping it simple.

Suggestion #1: Grocery shop once per week, preferably on the same day every week.

Interestingly, I get a lot of resistance to this. The argument usually runs: “But I won’t be using the freshest food if I only shop once a week.” When I hear this objection, I invite a person to step back and look at what they’re already doing, and ask, “What is the alternative? Are you really going to go grocery shopping four times a week if you don’t even have time to do it once a week right now?”

Doing something consistently is better than doing it perfectly. There’s nothing wrong with being like the French and shopping fresh every day. But if you’re not doing it at all, the right “leap” to make is not into doing it every day.

This kind of perfectionistic thinking is partly what leads to overwhelm.

Instead, focus on one day per week when you can realistically go shopping. For many people, this is Saturday. Because I own my own business and have a bit of flexibility, I do it on Thursdays, and I have been surprised at how many of my traditionally-employed clients also opt for a weekday evening once they realize how much less competition they have at the store.

By getting to know one grocery store well, by going at the same time each week when (hopefully) it’s too busy, and getting into a habit of restocking the staples each week, you are one step closer to reducing your stress around meal planning.

Suggestion #2: Plan ahead, no more than three meals at a time, and use the leftovers.

Instead of thinking that you must inventively devise wildly different meals for each meal of the week (14 meals for one person, not including breakfasts), think instead of 2-3 meals that will have lots of leftovers. Big pots of lentil soup or chili, or pasta primavera, or quesadilla filling, can be easy to cook and last for days.

Assuming that your favorite restaurant meal isn’t the Bloomin’ Onion, it’s likely that you can find a way to re-create restaurant favorites healthier at home.

This is where Google will come in handy. I just did this the other day for Arancini – I love these Italian fried rice balls, but eat them probably less than once a year because of how heavy they are. It just occurred to me the other day to Google a baked version, and – presto – as it turns out, other people have thought of this before me.

Whether you love Mexican, Greek, Italian, or American fare, there is a way to cook it at home, lighter and healthier than you would have eaten at a restaurant.

This can be a source of inspiration when you feel stuck. Instead of trying to create the perfect meal plan that consists of “diet foods,” just do the radical thing of eating what you already like, but put through a filter of reducing calories in smart ways that keep the essence of the meal alive.

Suggestion #4: Use a system of following only one to three food blogs, and making the new recipes of the week each week.

Pinterest creates paralysis partly because it opens up an entire universe of possibilities. While this sounds great, in practical terms, most people don’t do well with limitless choices.

The multiplicity of options tends to paralyze, rather than inspire action.

Instead of using Pinterest, consider following one or two curated blogs and making the new recipes every week. I had a client who did this with the New York Times cooking section, and I’ve also had clients have great success with following Pinch of Yum, Skinnytaste, and The Real Food Dietitians. By narrowing down choices to just a few sites that update on a weekly basis, you’re essentially being told exactly what to cook each week.

Suggestion #5: Make a lot of the same foods every week (or every few weeks).

Part of the paralysis stems not only from information overload, but also from the pressure of creativity – the feeling that we must make new and exciting foods every single week.

But anyone who cooks regularly will tell you: there is a limit to how much “new” and “exciting” is actually practical. For example, I would consider myself to be someone who cooks a lot – I batch meal prep, but I’m making about 24 meals a week for two people, not including breakfast. I can say from experience: if you pressure yourself to constantly be pushing into novel territory, you’re going to run out of ground.

This repetition doesn’t really get boring – when you’re hungry, you’re just happy to eat tasty food that’s ready. The small changes are enough to introduce a little variety, but you don’t have to invest time in learning a whole new way of preparing food.

By making cooking more approachable and more realistic, you increase the chance that you will do it often, which is the key to success.

cooking, healthy recipes
← Did I Gain Weight from Exercise?
→ Low Carb Without Keto: Losing Weight Without Losing Your Common Sense 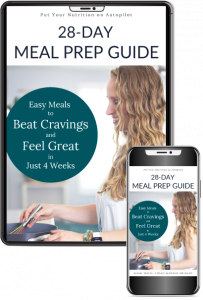